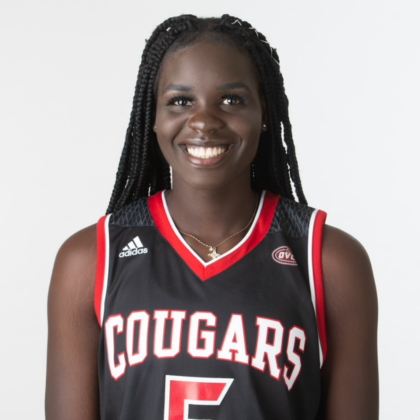 Ajulu Thatha first moved to Indianapolis when she was just 12 years old. Originally from a small village in Ethiopia, her family was separated after her father fled their home country due to political persecution and violence from the government. After escaping from Ethiopia, her father found safety in Kenya, where he lived in a refugee camp for ten years. He was eventually resettled in Indianapolis and petitioned to bring Ajulu, her stepmother, and her siblings to the U.S.

Within a month of arriving, the family was connected with Wesley United Methodist Church. A volunteer offered to take them to an Indy Fever game as a way of introducing them to the city. The volunteer had noticed Ajulu’s tall, slender frame and thought it might benefit Ajulu to introduce her to the sport of basketball.

“In Ethiopia, women don’t play sports. I’d never even watched a basketball game before but getting to see the female players on the court inspired me. It’s what made me decide to get involved in basketball,” said Ajulu.

After that initial experience, Ajulu decided to try out for a summer basketball camp sponsored by Ben Davis High School. “At first, I didn’t like playing. My body wasn’t used to the physical activity, and I remember being sore. I thought of quitting, but the coaches and other players were really nice. They kept encouraging me and told me I’d get better if I kept practicing.

Ajulu took their advice and continued honing her skills through camps and pick-up games. Eventually, she improved enough to join an AAU league her freshman year at Decatur Central High School, located on the southwest side of Indy. She learned that skilled players could receive scholarships to attend university. “I knew going to college would be expensive,” she said. “I wasn’t sure if it’d even be an option for me, but after finding out I might be able to pay for my studies through basketball, I knew I wanted to keep practicing and playing.”

And that’s precisely what she did. After graduating from high school, she continued her studies at Southern Illinois University Edwardsville on a full-ride basketball scholarship. She’s now entering her junior year there and majoring in mass communications.

She was also recently selected to take part in the 2021 Red Bull USA Basketball 3x Nationals. The event serves as the final evaluation of athletes for selection to the U.S. Women’s 3×3 Olympic Team. It also serves to identify athletes for other 2021 USA men’s and women’s 3×3 National Teams. “We didn’t win the games, but it was still an enjoyable experience. All the opportunities I’ve received from playing basketball motivate me to keep working hard. My goal after graduation is to be able to reunite my family and find a way for my mom to come to the U.S. It’s been ten years since I’ve seen her.”